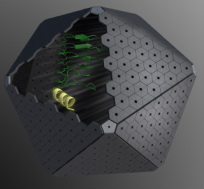 Bacterial microcompartments are organelles that are involved in both autotrophic and heterotrophic metabolism. They are similar to eukaryotic organelles in that they enclose proteins that work together within a selectively permeable membrane, but it is a membrane composed entirely of protein, not lipid. Cyanobacteria use a microcompartment called the carboxysome to optimize carbon fixation. This is achieved by packing the enzymes RuBisCO (Ribulose Bisphosphate Carboxylase/Oxygenase) and carbonic anhydrase within the protein shell. The shell also prevents the leakage of carbon dioxide, the substrate for RuBisCO. Through bioinformatic studies it is now evident that many other bacteria use different types of microcompartments (Kerfeld et al, 2010, Axen, Erbilgin et al, 2014, Kerfeld+Erbilgin, 2015) to efficiently degrade compounds for energy production, which involves sequestering toxic and volatile intermediates within the organelle. 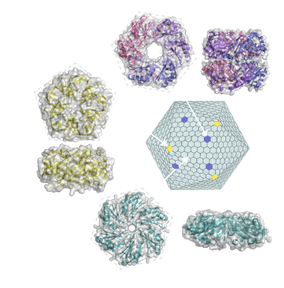 Three types of shell proteins self-assemble to form the shell. The differences in the sizes and charges of their pores are presumed to underlie the selective permeability of the bacterial microcompartment shell. We are interested in understanding the assembly and the structural and functional diversity of bacterial microcompartments. We have learned that carboxysome assembly proceeds from the inside out—the core proteins coalesce first and then are encapsulated in the shell (Cameron et al. 2013). We have solved the structures of several BMC shell proteins (Cai et al. 2013, Sutter et al. 2013, Klein et al. 2009, Kerfeld et al. 2005) and have observed that they have variable pore sizes and some appear to be gated; these are clues to understanding how the protein shell acts as a semipermeable membrane. We are also investigating the diversity of bacterial microcompartments. Through bioinformatics searches, we see that 20% of sequenced bacterial genomes encode microcompartment shell proteins. We predict that microcompartments have at least 10 different functions (Kinney et al. 2012, Axen, Erbilgin et al, 2014), and have experimentally established the function of one (Erbilgin et al. 2014). In addition, we have begun to use the shell proteins of various functional types to build synthetic shells (Lassila et al. 2014); proteins can be directed to associate with these shells by attaching peptides that we have bioinformatically identified for diverse microcompartment types (Kinney et al. 2012). 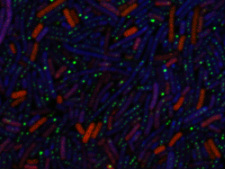 The carbon-fixing enzyme used in the Calvin-Benson cycle is Ribulose Bisphosphate Carboxylase/Oxygenase (RuBisCO), which catalyzes both the carboxylation and oxygenation of the sugar ribulose bisphosphate. The carboxylation removes carbon dioxide out of the atmosphere and generates the food that all organisms need to survive. However, the oxygenation produces a toxic compound that wastes valuable energy (through photorespiration). Despite millions of years of evolution, the oxygenase activity persists. Various species have developed mechanisms to deal with the wasteful oxygenation: plants have evolved a "slower" enzyme that is more selective towards carboxylation, and some plants put spatial or temporal restrictions on where/when RuBisCO is present and active. One avenue we have explored is introducing an energy-efficient synthetic biochemical pathway to bypass photorespiration, resulting in minimal energy loss after oxygenation (Shih et al. 2014). We are also studying other aspects of CO2 fixation pathways (Zarzycki et al. 2013, Stanley et al. 2013, Zarzycki and Kerfeld 2013) to design other mechanisms to improve CO2 fixation. 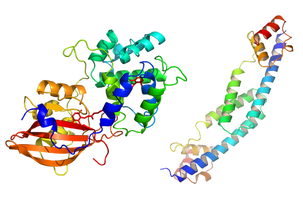 The conversion of solar into chemical energy by plants and cyanobacteria is essential to life on earth. However, when the amount of light energy exceeds the amount useful for photosynthesis, the excess energy can lead to the production of highly reactive molecular species that can damage the photosynthetic apparatus and ultimately harm the organism. To protect against the dangers of high light, plants and cyanobacteria have evolved rapidly reversible photoprotective mechanisms in which excess energy is dissipated as heat.
In cyanobacteria, photoprotection involves dynamic interactions between the light harvesting antenna, the photoactive Orange Carotenoid Protein (OCP), and the Fluorescence Recovery Protein (FRP). The OCP was first identified in 1981 by David Krogmann (ASPB news 43: 26-27, 2016). An activated form of the OCP binds to the light harvesting antenna and dissipates excess absorbed energy when the organism is exposed to high light intensity. The FRP can subsequently inactivate the OCP and detach it from the antenna, thus restoring the full capacity for light harvesting to the antenna. Our group has played a critical role in elucidating the structural basis of photoprotection in cyanobacteria: atomic resolution structures of the OCP (Kerfeld et al. 2003, Wilson et al. 2010) and the FRP (Sutter et al. 2013) have provided numerous insights into the structure-function relationships responsible for the photoprotective activities of these proteins.  For example, we have recently worked out the specific functions of each structural domain of the OCP (Leverenz et al. 2014).  Our group continues to work in close collaboration with the Kirilovsky Lab to dissect the structural basis of OCP photoactivity, as well as the structural basis of the complex intermolecular interactions between the phycobilisome antenna, the OCP and the FRP.
Ultimately, we expect the short-timescale photoprotective mechanisms mediated by the OCP family of proteins to play a critical role in the ecophysiology of cyanobacteria – organisms that inhabit a wide range of environments, some extreme. Given the intense interest in developing cyanobacteria for biotechnological and biofuel applications, a detailed understanding of the molecular mechanisms responsible for partitioning energy flow under fluctuating light intensities could prove to be essential for maximizing the productivity of these organisms in natural environments. 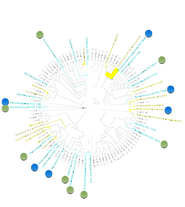 We partnered with the Pasteur Culture Collection for the sequencing and analysis  diverse cyanobacterial genomes. The Cyanobacteria were chosen because of their ecophysiological diversity, their role as model systems for research in photosynthesis, photophysics, evolution of morphology and multicellularity and for applications in biotechnology and synthetic biology. As one of the oldest lineages of life, cyanobacteria have diverged considerably in morphology, metabolism, and lifestyle. Because of this diversity, oxygenic photosynthesis has evolved to function in a myriad of environments (freshwater, marine, hypersaline, desert, tundra) and has significantly contributed to eukaryotic diversity through plastid endosymbiosis. Unfortunately, genome-sequencing projects have been heavily biased toward a small subset of cyanobacterial clades, resulting in suboptimal phylogenetic sampling of this highly diverse phylum. The CyanoGEBA project (Shih et al. 2013) generated 54 new cyanobacterial genome sequences, including representatives of two of the five morphological Subsections that lacked sequenced representatives.
Related data files and publications:

This work by Cheryl Kerfeld is licensed under a Creative Commons Attribution-ShareAlike 4.0 International License.